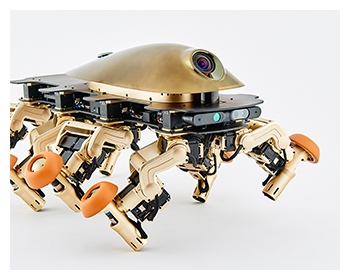 fuRo Official Website
Changing the world with robot technology-this has been our objective since fuRo’s founding in 2003. Modern society faces a myriad of complex problems, which have caused us to feel more anxious about the future. We started our work because we wanted to change this trend using robot technology. Using advanced techniques and various kinds of intelligence, we have been able to solve real world problems, such as creating reconnaissance robots for nuclear power plant disaster site that can work effectively under extreme conditions and developing technology that can improve personal mobility on public streets.
In 2015, our activities entered a new phase: The Japanese government has adopted our plan for transforming the entire city through robot technology in time for the 2020 Tokyo Olympics and Paralympics. Robot technology will be fully utilized not only for traffic and security but also in the fields of communication and entertainment. Our future goal is to create a city where all people, including the elderly, people with disabilities, and foreigners, can equally pursue happiness. Achieving this goal will require not only technology related to architecture, machinery, and electricity, but also knowledge in the fields of finance and project management. Luckily, the Chiba Institute of Technology has specialists in all of these fields.

What are the origins of planets and life?
Trying to solve the greatest mystery of recorded history 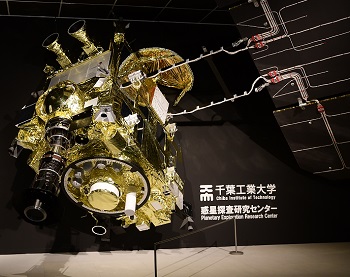 PERC Official Website
Molecules that make up proteins and nucleic acids (DNA) considered essential for life exist everywhere in the universe. However, the current position of most scientists, based on astronomical calculations, is that the double helix structure of DNA or complex protein structures couldn’t have occurred by accident. This means that if life is a miracle that occurred only on earth, then the prospect of finding other life forms near distant stars is hopeless. But it is also possible that simple life forms, or amino acids and nucleotides, which are the building blocks of life, can travel to Earth through space from other stars. We believe this is quite possible.
PERC is currently investigating the origins and evolutionary processes of life in the universe, a field of research called astrobiology. We develop robots and observation equipment for use on planetary probes, investigate the composition of planets and asteroids, and search for traces of organic substances or life throughout the cosmos. We are now working on various projects in collaboration with the Japan Aerospace Exploration Agency (JAXA), the U.S. National Aeronautics and Space Administration (NASA), and other organizations. We have gathered professionals from the fields of geology, biology, mechanical engineering, and analytical chemistry to conduct investigations from a comprehensive perspective. As a result, we have produced some of the world’s top-level research. 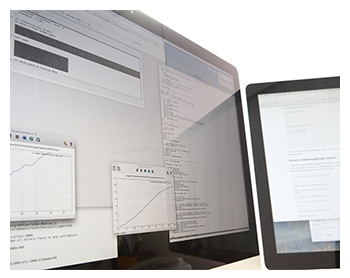 How do human beings acquire language? For researchers working on artificial intelligence and software, this is an extremely important question.
From about 18 months after birth, babies develop language skills quite rapidly. Learning a language means understanding the concepts of objects and actions that words indicate.
This, in fact, is extremely high-level learning behavior. What’s more, infants learn on their own how to combine words in order to convey their desires, and start thinking using language on their own. Trying to get computers to do the same thing is currently quite difficult.
Intelligence―even if it is artificial―by definition needs to be able to acquire concepts autonomously. Here at STAIR Lab, we are making full use of the most advanced machine learning theories and software technologies to solve this most challenging of computer problems. None of the issues involved are easy, but this is precisely what makes the research worthy of challenge. Perhaps the day will come when a new “intelligence” born at CIT will be able to stand on its own and communicate with us on an equal footing. 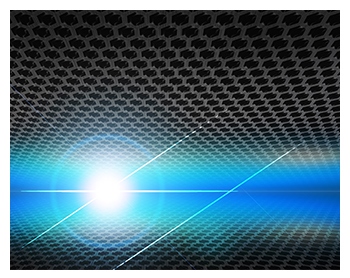 Frontier resources in the ocean including manganese nodules, cobalt-rich crusts, hydrothermal sulfide deposits, and rare-earth elements and yttrium (REY)-rich mud are expected to supply a variety of critical metals. However, no country has yet been successful in the actual development of the abyssal frontier. At the Ocean Resources Research Center for Next Generation, we aim to be the first in the world to develop the ocean resources. With that goal in mind, we are carrying out research and development on topics ranging from the basics to practical application, including ocean resource exploration, mineral lifting, ore dressing, and smelting. We expect the achievement of our researches to lead society in creating and developing related industries, which will help revitalization of Japan’s economy.

Modern science has advanced based on the basic ideas of dualism and reductionism. This way of thinking entails dividing nature into small domains, deciding on problems that need to be solved, and then solving those problems. This methodology has been so effective that secrets of nature, hidden since the age of ancient Greece, have been uncovered one after another. This knowledge has been fed back into our society and has led to advances in techniques for applying that information to society. Thus, science and technology have driven the forward movement of civilization like the two wheels of a cart.
From about 1970, we’ve become more aware of global-scale problems, such as those involving the environment, resources, and energy, which has thrown doubt on the underlying premises of a civilization composed of modern science and technology. Since then, we’ve pointed out the importance of viewing civilization from a broader, systematic perspective, and we’ve proposed the view that civilization is essentially a way of life that creates a new human sphere component within the global system.
Based on this idea, we’ve emphasized that for the healthy development of civilization, we need to reconstruct the academic system that has become overly fragmented, so that we can build a new intellectual framework. This new approach, which has been called “Geo-Cosmology,” truly aims to integrate the humanities and sciences. This is an epoch-making attempt not seen since Descartes and Bacon and seeks new horizons for the previous scientific method of dualism and reductionism.
Specifically, this attempt started in 1995 with the “Century of Geo-Cosmology Forum,” an academic society which gathered together some of Japan’s greatest researchers across the humanities and sciences. The society has produced various results over the twenty some years that followed, but with many of its original members growing older, the society was discontinued in March 2017. The results have been collected in a voluminous work “Comprehensive Geo-Cosmology.” Since then, however, there have been calls from various fields expressing the desire to continue the society. In response, CIT has established this new research center to advance that valuable work.
CIT’s founding spirit is “Contributing to the world culture with technology.” This is also the challenge of Geo-Cosmology. Future technological developments will require us to have the ability to design civilization on our own. This is not something that can be done without the panoramic perspective of Geo-Cosmology. In this sense, CIT is the first Japanese university, which anticipate and address the future coming generation of science and technology .